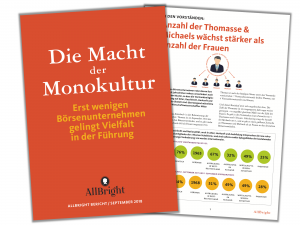 A male monoculture continues to dominate among Germany’s top companies. This is the conclusion of the current Allbright Report, a politically independent and non-profit foundation based in Stockholm and Berlin.

The increase in the number of women on the boards of 160 German stock exchange companies last year was so small that it roughly corresponds to the simultaneous increase in the number of men named Thomas. A male monoculture dominates the top management, which they are unable to shake off: Thomas recruits Thomas and Thomas in turn recruits a Thomas who is very similar to him; on September 1, 2018, 92 percent of the board members are men. Little of the diversity in German society reaches these management levels.

© 2021 Silke Cramer
We use cookies to ensure that we give you the best experience on our website. If you continue to use this site we will assume that you are happy with it.Ok